The first thing I do when I wake up is groggily reach out for my iPhone for the time, my morning news updates, messages and emails…. AND what has become a vital part of my day, my INSTAGRAM feed. This is where I get my real news, most importantly including the THE CURRENT HAPPENINGS OF THE ART WORLD.

Naturally I assumed I would get a variety of posts when I woke up last week; however, what stared back at me from my rectangular mobile screen was a series of legs aimed like guns about to be fired into my retinas. I kept scrolling down, anxious for a family picture or a meal post, but all I kept getting were these limbs raised as if ready for WAR.

It took me a moment to realize it was the doing of NOTORIOUS Chinese artist and political activist Ai Weiwei, who posted the first picture wearing nothing than his underwear a traditional straw hat and sticking his leg out like a gun (pictured above), the artist created a visual stimulation that may address so many underlying factors, with the caption “Beijing Anti-terrorist Series”.

Naturally before overthinking this, I felt the need to JOIN IN. That evening, I took my first #gunleg photo and posted it on my Instagram, within 5 minutes, as I was checking for my followers responses, I realized that Ai Weiwei had reposted my picture. It literally made me jump with joy, as this LEGEND reposted my #GUNLEG. 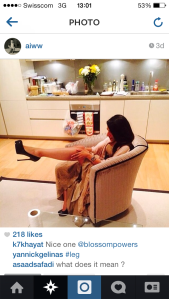 Here I am in my home in London with the artist being literally across continents, and within a space of minutes he has seen my picture and acknowledged it (see image above). Thus my OBSESSION began, and #GUNLEG is a current trend I have still not gotten enough of.

Being confined to one country has NOT stopped the artist from spreading his ideas globally. Like anyone living in our world, Weiwei took to SOCIAL MEDIA to create one of the fastest growing meme’s that may finally ‘out-post’ grumpy cat photos … This time it happens to be in the form of one of the FEW social media platforms that is UNBLOCKED and UNBANNED in China – Instagram. Now, you have the POWER to take politically charged selfles, and to get legit recognition for

Ever since several articles on the Guardian, Washington Post and BBC News to name a few have written articles trying to deduce Weiwei’s ultimate connotation, since his team have refused to respond to any inquiries. Some say it has drawn inspiration from The Red Detachment of Women, a state-sanctioned ballet that was famously shown to President Richard Nixon during his 1972 visit to China as a portrayal of women’s rise in the communist party. While others claim it is in direct correlation with the 25-year anniversary of the protests in the Tiananmen Square, satirically commenting on China’s onerous Cultural Control (The Guardian).

Although refusing to answer press questions, when pressed by the Washington Post, Weiwei replied with this ambiguous and rather mischievous answer: “It is a pure use of social media. To pick up public notions on mixed issues — the power to control individuals…terror, arms, many issues… to use the body as weapon,” he said. “You cannot do this with a novel or movie or in theater. It’s more like poetry… Some are so empty; some are so profound.”

As we at CH say… Stand up for what you believe in. Follow your he(ART). Join the movement. Be PROACTIVE.