The opening of Saber’s The Ugly American had a record attendance level this past Thursday at The Outsiders Gallery in LONDONTOWN. This exhibition includes a large number of ABSTRACT GRAFFITI styles on canvas and wood. It is the gallery’s FIRST show of the NEW YEAR and WELL WORTH THE VISIT! 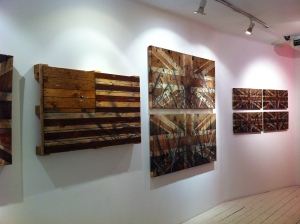 Saber’s works were divided between two floors. A total of seven trademark Stars’n’Stripes flags (Old Math Series) on stained wood, depicting the American Flag and the Union Jack, were BEAUTIFULLY displayed on the entrance level of the gallery (images above). Eight more works were displayed in the basement (so don’t forget to go downstairs)! Each work varied in size but stayed within a reasonable measurement for a gallery setting, in contrast to his works that can be seen in an outdoor environment. Yet, the use of spray paint, oils and charcoal to create these different graffiti pieces not only expanded the dimensional constraints but the overall depth of each piece. To some extent these small-scale works are even more beautiful than some of his pieces seen outdoors, as the artist now had the opportunity to use a variety of mediums.

The wood series has a more muted tonality with a more dominant use of the natural wood coloration, while the abstract graffiti canvases have VIVID splashes of colour amongst toned down tones (see images below). It gives the otherwise gray walls of the gallery a more lively conversation. 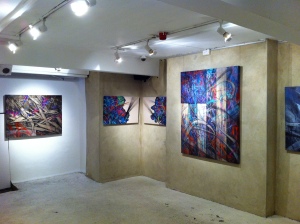 For Saber, these paintings are meant to give those spectators who know nothing about graffiti an opportunity to look at his work and say, “This is a beautiful painting.”

The title of the show refers to the popularized phrase in William Lederer’s and Eugene Burdick’s 1958 novel, The Ugly American, which revolves around  international perceptions of Americans. Saber states in his Press Release for the show, “It’s a reference to the excesses, and foul nature, that some believe Americans possess. Obviously this has similarities to modern Britain too, but… I come from this culture that’s so self centered, and self-preserved, and I want to expose the cracks in it.” He has been known to go AGAINST many of the OFFICIAL POLICIES in the US, particularly those surrounding the health care system, misuse of public funding, and cuts in the art sector. These themes are some of the key factors dominating his works. It is no wonder this well-received exhibition was brought to London by POPULAR DEMAND.

Do yourself a favour and go check it out!