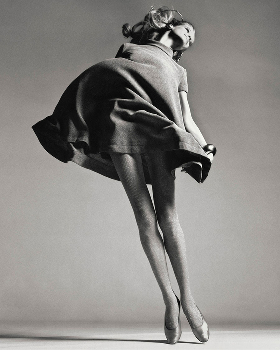 Richard Avedon, FASHION photographer turned ARTIST shows the DIVERSITY and COMPLEXITY of photography in his newest solo exhibition at Gagosian Gallery (Davies Street, London) which is currently on display until October 26th.  Avedon exhibits a collective of fashion photographs from his work between the 1960’s and 1970’s in “Avedon: Women”. These fashion photographs not only depict the BEAUTY of the clothes, but do something greater, or so I think. I think what makes this exhibit so INTERESTING and INNOVATING is his questioning of the role of photography and how it is used. He attempts to differentiate his photographs by breaking all the rules by portraying his models in motion -confident, vivacious, with a joie de vivre. The COUTURE clothing only accentuates these eccentric poses. Although these photographs can seem superficial and more fashion photography-like, Avedon cleverly and slyly evokes deeper meaning. Take Jean Shrimpton, evening dress by Cardin, Paris 1970’s (below). 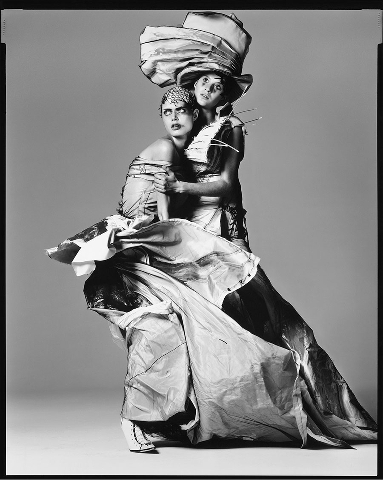 Sure it is a beautiful silk gown in motion, but is Avedon bringing more to the table? Is he referencing some sort of art historical reference say…Unique Forms Of Continuity in Space (below) by Umberto Boccioni. 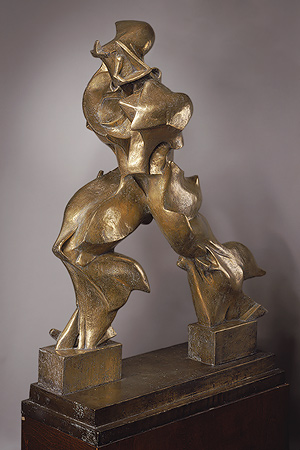 What Boccioni did for Italian Futurist art sculptur e- attempting to bring the MOVEMENT to the medium of sculpture is what Avedon does for photography. He brings a certain DYNAMISM, which rethinks the medium of photography from being still and motionless to active and forceful. The cloths only highlight this movement as well as create a certain tension to the pieces. In a way he is self -contradictory in his works, intensifying the action through the draping of the clothing but capturing it in the stillness of the camera – makes you think right?

We all know who the great Andy Warhol is. This iconic American POP artist took over the art scene in the 1960’s and reigned over it for more than 20 years, as the American King of art . His influence is still highly prevalent today. Go into a restaurant, flat, a club – his reproductions lie everywhere. His iconic pop paintings, with its rich, colourful vibrant hues, and depictions of American celebrities such as Marilyn, Elvis, and Jackie (Onassis turned Kennedy) celebrated American culture; however, we must bear in mind Warhol was a very mysterious, philosophical, contradictory man – were his works really celebrations? Could they have perhaps been the critiques on the rising consumerism of American life during the 1960s? However important these questions are, they are for another time, another blog post.

While many people fall head over heels for his paintings and silkscreens, I particularly am not a fan of his paint works. These vibrant blues, pinks and yellows do not aesthetically please my eye. (Warhol groupies out there -DP in particular- don’t hate me for this statement).

What interests me more about Warhol, is his later experiments with video, in particular “Sleeping”. “Sleeping” filmed in 1963 is a looped film that created much controversy and scandal (film above – you don’t have to watch the full film, but just watch a minute to get the idea). The film displays John Giorno (a friend, but many people speculate he was a lover of Warhol) sleeping for eight hours, mimicking the duration of a natural sleep. It was a direct critique of the Hollywood narrative films being produced at this time and Warhol described his piece as a work of anti-film – a means in diminishing the desire to look at an image. On its debut, many people were extremely disappointed and angered. Why would anyone sit and watch a film for eight hours of a man sleeping? Keep in mind, the film was looped.

What these people neglected to see at this time was Warhol’s reaction to the voyeuristic narrative films of the 1960s. However, Warhol is a very intricate, layered man – he was doing something more. Warhol in my view was capturing the beauty of something so normal, that we just don’t generally think too much of.

His subject matter was a man that was closely related to him and a man who he loved dearly. There is something so vulnerable yet beautiful in the state of slumber. All your inhibitions are erased and you are leaving yourself vulnerable to the world around you. Vulnerability is something that many of us hide from one another. BUT when you are comfortable enough to sleep beside someone you trust, you are allowing that person to see that vulnerability. You give yourself up to them, trusting them whole he(ART)idly, which is something difficult to do. It’s an act of love and love is beautiful.

Sleeping is an everyday act that people take for granted. Stop and smell the roses. See the beauty in the little things. It is the small things in life that are the most beautiful. Wouldn’t you agree? And on that note…