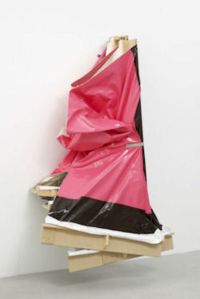 If anyone remembers the Turner Prize in 2010, ze award was given to Susan Phillipsz. Now I am no art genius and my opinion does not have validity at this point in the art world. Having said that it, I would like to applaud Angela de la Cruz’s work (above) and make the point that her work is extremely daring and twists notions of painting-which is why art is progressive in its practice. I will make the case here that I believe the work of Angela de la Cruz should have won the Turner Prize in 2010. You do not need to take my opinion into consideration, but I urge you to look at these works and pretend that you are a judge. It is fun!

The Turner Prize is an award, or THE AWARD, given to an artist that has made the greatest contribution to the British Art World within the last year. It must be awarded to an artist that is under 50 years old, and has lived or worked in Britain for at least 12 months. In 2010, there had been four individuals that were selected to win the Turner prize; each with their own unique take on art.

The four nominees for the 2010 Turner Prize were The Otolith Group film
artists, Dexter Dalwood – a painter, Susan Phillipsz – a sound artist, and
Angela de la Cruz – a painter.

Angela de la Cruz is a Spanish born artist (1969), born in the city of La Coruna. In 1989, she moved to London to study art. Tragically, de la Cruz suffered a stroke in 2006, and was unable to work for a few years. With renewed energy and dedication she bounced back and began painting, again. However, the artwork that she was nominated for was created prior to her stroke.

Angela de la Cruz was nominated for her solo exhibition at the Camden Arts Centre. She had BROKEN the norms of painting physically and figuratively. Her paintings and sculptures have been destroyed and reconstructed in order to evoke a new sense of art. An example of this is her painting “Hung” which was a painted canvas. The frame of the canvas was later deconstructed and reconstructed in an unusual shape. This gave the painting a sense of awkwardness. She uses her art pieces as a language to convey feelings of rawness and humour.

Her playfulness in her artwork is what I admire most about her. There is a satirical humour that her art radiates. It is not merely paintings on a wall, but personalities that interact with the viewer. Each of her pieces of artwork has their own persona. I believe unlike the other artists, she has made new developments in the world of art, due to her unorthodox approach to it.

Angela de la Cruz does not accept art the way it is, but attempts to redefine it. And isn’t that what makes good art? She follows in the steps of Duchamp and Pollock as art innovators.  Her pieces have a sort of Duchamp/Robert Morris hybrid. She questions art. Her pieces force the audience think; what is art? Can this be art? How does one define what art is? Angela de la Cruz’s art is interactive. This is what an artist should do, question art and constantly be redefining what art should be.

Well this is what I think, but why not take a stab at it yourselves!

I give you the articles and videos of the Turner Prize 2010. Take a
look… think about it. Were the jurors right or wrong? Let us know
what you think.