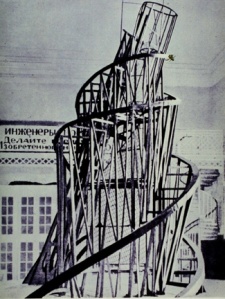 Take yourself back to 1920 in Russia. The Bolshevik Revolution just ended in 1917. And a new era was beginning – the IIIrd International. So, obviously, a new monument had to be created, hypothetically, to spread these new ideals.

The IIIrd International was an organization founded by the Soviets to spread a world revolution. Tatlin, an architect and artist, had the idea to construct this monument in essence, as a propaganda machine in a Russian Constructivist manner, which allegedly would be functional.

The aim of Russian Constructivist Art was to reject art forms of the “old order.” These artists believed “Art in the past stood in the place of religion. It arose from the main spring of individualism.” To this new socialist society, art of this kind was not accepted.

Russian Constructivists had a preference for geometric forms. To these artists, basic geometry stood for modernity along with a renunciation of sins of the past. WHAT SINS?!

Unlike past revolutionary art, Tatlin wished to erect this monument without conventional Russian images like the red star, or hammer and sickle; better yet, he planned not to use any representational images at all. Kind of (keep reading). The monument was to be seen as a new symbol, and a new type of monument. It was symbolizing a celebration of the industry, technology, and the kind of futuristic world that was going to be created through industrial progress and the new order.

This monument was a GRAND vision – that we know never came to be – clearly. The inside of the tower was to house rooms and offices through three separate “internal” entities. The three inner parts – based on geometric forms – a glass cube, a glass pyramid, and a glass cylinder were to act in a sense as a functional part of the monument. However, it could also be suggested that this monument implies a certain type of order – a talked down one, where deliberate legislative members would be in the bottom cube, offices of more important people would be above in the pyramid, and on top, the cylinder would be used for executive functions. Oh and did I mentioned the inner forms of the structure were to rotate at different speeds?

This machine like monument (it was supposed to be 1300 feet tall) was utopian in the sense that everything was to work together, and exhibit a kind of perfection in Petrograd, now known as St. Petersburg.